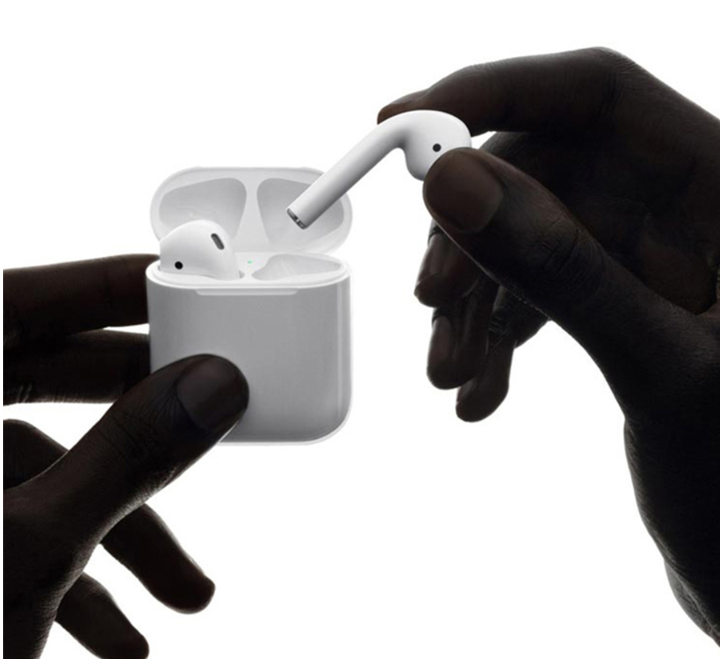 In addition to this new-ness, Apple has also released AirPods 2. They announced new iPads. And new Apple– (vacuum turns on) watches for spring time. I’m also getting my entire house painted, so that’s (laughs) that’s also happening right now. So this video is gonna be super interesting for both of us. (laughs) Ugh… Like where should I even put my computer at? Alright, well I guess I’ll just pause this. (vacuum continues) (vacuum ends) Okay, I’m back. New AirPods! AirPods 2 was announced recently, if you’re watching this, it was March 20th that they were announced. I woke up and I was so excited that I rolled over in bed and it was the first thing that I saw on my phone.

It was like 10 different people said, “Did you get the AirPods?” I wasn’t even awake yet and I was ordering these AirPods as fast as I could. You can get 50% more talk time. You can get hands-free Hey SIRI. And, the new wireless charging case is pretty much the thing I’m most excited about. So now there’s 3 different options that you guys can get for AirPods. You can get the stand-alone basic AirPods for one fifty-nine. For one ninety-nine, you get the wireless charging case and the new AirPods. Or if you want to save some money and just get the wireless charging case, you can get that for $79 and use your old AirPods. Which I think is probably one of the the smartest bets because if your AirPods are working perfectly fine, there really is no point in spending over a hundred dollars more to get AirPods plus the charging case. So I think that’s a very great option and I’m super glad that they have that.

And as soon as I get mine in, of course, yes, I will make a video about it. Another things that I saw that was super exciting is there is a spec boost in the iMac Pro. They now offer two hundred and fifty-six gigs of RAM in the iMac Pro. Which basically makes my eighteen four one twenty eight gig of RAM four terabytes drive just a completely obsolete computer now. Like I don’t even know how to function. And I’m joking, obviously. If you can’t sense sarcasm, I’m sorry. You guys may have also seen that they announced new iPads. They have a new iPad air and an all new iPad mini.

The iPad Air is a inch iPad. Of course, it has A12 Bionic chip. It has 70% (mumbles) Two times faster graphics plus the retina and the True Tone Display. Another excited thing is both the iPad Air and the iPad mini they both will have Apple Pencil support. No, not Apple Pencil support for the new Apple Pencil, but the original Apple Pencil because the design of both of these is the old design. This Apple Pencil has the magnetic charging, so this connects to your iPad just like so.

But because the old iPads have the old design, they still have the old Apple Pencil that you charge with the Lightning Port which, we all know, it’s by far the worst design ever. But, it gets the job done and thankfully all of the iPad Pros (clicks) This is incredible. I’ve been using my iPad so much more lately. The graphic performances increased by nine x where the overall performance is three x, which is pretty significant considering the fact that this hasn’t been updated in a really long time. I mean I kinda thought that they were gonna do away with the iPad mini. So it is kinda exciting that they did decide to revive it. Bring it back and make it more powerful, because I think that the iPad mini is used in different use-cases. It’s used in restaurants. It’s used in smart homes. It’s used in many different cases not just as a tablet for you to watch content on. The price for the iPad Air for the Wi-Fi version is four ninety-nine and the Wi-Fi plus Cellular starts at six twenty-nine.

The iPad min starts at three ninety-nine for Wi-Fi and for Wi-Fi and Cellular it’s five twenty-nine. Something else that they have announced. Happy first day of spring to you guys and to me and to all Apple Watch band members. Band members? (mumbles) Mmm… I’ll get back to myself on that one. There are new spring time Apple watch bands and I need to just show you guys these. Let me open up my screenshots. So my favorite colors of all of these I’d have to say is the papaya, the spearmint, the lilac. I’m such a big fan of the sport loops. I never used these until fairly recently and it’s really, really, really, really, great. I was so into the sport bands for the longest time that that was all I wore. I only wore like the Nike sport bands, and then the first time that I tried the sport loop It really is perfect for working out and doing activities.

It’s like, where did my Apple Watch band get stuck to? Like it’s a process to find it. I don’t think that you should throw them in the dryer but I have been usually because I just forget about it. So far, so good and I do it all the time. This is uh, that’s it. That was some of the latest news. I really am just making this video because I needed to test out my lighting.

I need to test out my audio. And obviously the audio probably (mumbles) I’m working on a lot of really fun things. I’m redoing my office, I’m redoing my set, I’m redoing so many different things. I feel like for the past year there’s been a lot of stuff going on and especially like recently like in my personal life and things like that so, I’ve just been dealing with a lot of stuff so, I just wanted to say thank you guys for always being there and thank you for watching my videos and It really does mean a lot to me and I’m looking for to some of the fun changes hopefully here on my channel and around me. Let me what you guys think of the set. If you guys have any suggestions, feel free to let me know.