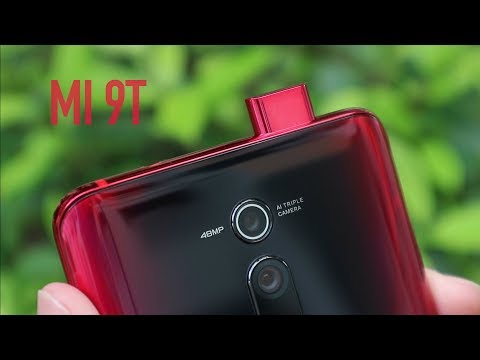 This is the Xiaomi Mi 9T, also known as the Redmi K20. With a regular retail price of $449 Singapore dollars, and possibly cheaper if you look around a little harder, it seems to be an incredible deal. But is it? Well, spoiler alert, it actually is.

Here’s why. On top of a metal and glass design, the Mi 9T comes with an almost bezel-less screen, a pop up camera, and an in-screen fingerprint sensor. Even though it lacks water resistance, the screen could be a little brighter, and the fingerprint sensor could be a bit faster, it all still works well enough. I think it’s pretty incredible that we are now able to get a phone that looks like this, at this price point. Talking about looks, the design of the rear panel has a nice shimmery look to it, and then you have the nice little touches as well.

Like the way they’ve implemented lighting on the pop up camera, and how that light actually works as a notification light as well. In terms of functionality, the position of the notification light probably isn’t that useful, but it is still really cool looking. Anyway, in terms of how the phone is like to use, it’s actually pretty great. The Snapdragon 730 performs really well. It’s able to handle pretty much everything that I throw at it, including gaming. For most consumers, I think this level of performance is already more than good enough. It’s a really enjoyable phone to use, especially with a screen this nice. Everything just looks better, even if I’m just browsing through Instagram. It only has a single firing speaker, but it does sound pretty loud and clear, so consuming media content on the phone is still really enjoyable.

Best of all, the phone has 4,000mAh battery which can easily get me through a day of heavy use. So I don’t even care that there isn’t wireless charging, since I just need to charge it when I go to bed. But as usual, I’m still not a fan of MIUI. I don’t like how I can’t disable some of the built in apps, I don’t know why the weather app needs phone and storage permissions to work, and the way they’ve organised the settings is a little weird. For example, if I want to turn off the notification light, it’s not in the Notification settings. Instead it’s under additional settings. If I want to change the navigation buttons layout or use gesture navigation, it’s not in the button and gestures settings.

Instead, it’s under Full screen display. It’s just weird. But I’m really just nitpicking here, it’s really not that bad. In terms of permissions, most of the other essential built-in apps still works even if you don’t give them all the permissions. For the rest of the UI stuff, I can always just install a launcher. Overall, it’s still a decent enough experience. Next up, would be cameras. It has a triple camera setup consisting of an ultra wide angle, standard, and telephoto camera, just like a lot of flagship phones these days. The main camera is a 48MP IMX 582 sensor. The only differences compared to the IMX 586, seems to be the lack of hardware HDR, and 60fps 4K recording.

So other than that, image quality is pretty much just as good. It is able to capture good looking images with nice details in good lighting, and the colours looks pleasing enough as well. Shots in low light looks just decent, but if you want a brighter shot, Night mode works well enough. It’s just a shame that it doesn’t work with the wide angle or telephoto camera, because they’re pretty much useless in low light. On the bright side, they do work well enough in good lighting, and a nice wide angle camera is always fun to shoot with. The front camera is surprisingly good as well. It’s able to capture really nice details, even in less than ideal lighting conditions. Overall, it is a pretty nice camera experience.

The quality is of course not quite as good as flagship devices, but considering the price of the phone, I think it punches above its weight. So, just want to mention a few more things about the Mi 9T. In regards to the pop up camera, Xiaomi did say that it’s good for at least 300,000 uses, but that’s something I can’t verify. So take it with a grain of salt, and try to take good care of the phone. For those who are used to budget Xiaomi devices, you might miss the IR Blaster and expandable storage. But it does have NFC, which is really useful since we can use if for public transport here in Singapore. So all things considered, this is why I think the Xiaomi Mi 9T is an incredible deal. With the amount of hardware and features on the phone, I was expecting the phone to cost more than this. The only thing I’m a little unsure of, is how well the software will age over time, since Xiaomi isn’t that great at doing software updates. But other than that, it’s a solid phone.

So, if you’re looking for a brand new phone that doesn’t break the bank, definitely check this out.